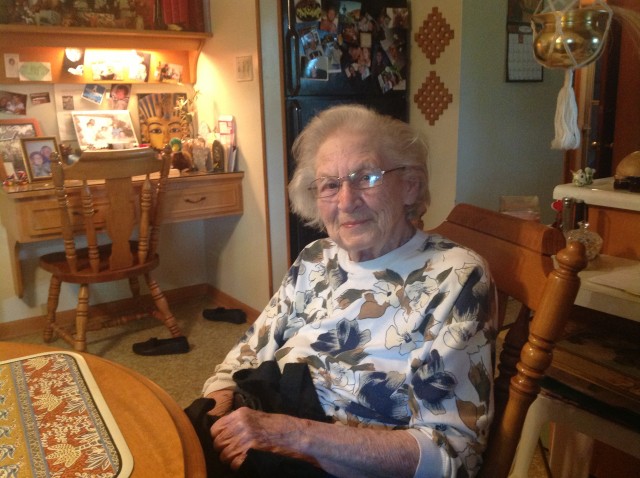 Her daughter (my cousin), Sue has 2 children
Her other daughter (my cousin) Judy has a son who opened a craft brewery in a converted church in Virgil, ON recently
—
Geraldine and her sister Beatrice married two brothers, Duncan and John respectively.
—
Liz and I visited with Geraldine in the late fall of 2011 at her home in Stratford, ON
(she lives alone) All her siblings except Edward and her half brother Fred are deceased.
Geraldine and Duncan moved to Stratford from Niagara Falls in 1964
Edward Rowan lived in Toronto with his wife Jeannette ( sadly, Ed passed Oct 16, 2016 )
—
Eva (1914), Beatrice(1916), Margaret(1917), Eileen(1919), Geraldine(1923), Thomas(1926), Edward Rowan Rowan(1932)

Fred was born in Bracebridge, ON and is interred at Fairview Cemetery, Niagara Falls, Ont. (section 5, plot 308 – grave 1)

Etymology & Historical Origin – Rowan
Rowan is an anglicized version of the Irish male name Rúadhán, from the Gaelic word for “red-haired” or “little red one”. The name was borne by a 6th-century Irish saint in County Tipperary who has been venerated as one of Ireland’s Twelve Apostles. Saint Rúadhán gave the prophecy that the Celtic pagan king Diarmait would be killed by the roof-beam of his hall at Tara. The king thus had the beam removed and cast into the sea. Unbeknownst to him, the beam had been retrieved from the sea and placed in the hall of Banbán. While on a circuit of Ireland, Diarmait arrived at the hall where the beam fell on him, killing him, and so Rúadhán’s prophesy is fulfilled. Rowan is an Irish name that denotes certain physical attributes, in this case, red hair. It has mainly been considered a masculine name in Ireland, but Rowan is also used on little girls. The feminine Rowan is usually associated with the Scandinavian word for the attractive Rowan tree with clusters of bright red berries. In this case, Rowan is believed to come from the Old Norse “” meaning ‘getting red’. Red is obviously the recurring theme with the name Rowan. In Celtic tradition, the rowan tree was revered for its balance between beauty and stamina. It was also for its protective qualities symbolized by the tiny five-pointed star at the base of each crimson berry. These berries also attracted songbirds which the Celts saw as an omen of goodwill.